Today we celebrate the Assumption of the Blessed Virgin Mary.

Our Mother has so many names which we can use to relate to her. This starts in the First Reading with the “Ark of the Covenant”. St. Ireneaus, a follower of St. Ignatius who is believed to have learned from St. John himself, is thought to have introduced this title, which ties in so much of the Christocentric nature of how the story of Salvation ties together from the Old to the New Testament.

The imagery used in Revelation can be very difficult to understand but perhaps one of the most common beliefs of this book is that the woman being referred to is our mother Mary, who also represents a model for the Church. Psalm 45 is a testimony to the interconnectedness of the King and Queen, the Queen in the Old Testament generally referring to that of the King’s mother. As Jesus exemplified the importance of the Servant King, His mother takes her seat on the throne by perfectly following his teachings.

It is so comforting that we can turn to Mary at any time, asking her to go to her Son for intercession. 1 Corinthians 15 then notes “For just as in Adam all die, so too in Christ shall all be brought to life”.

Similarly, another title of Mary is the “New Eve”, reminding us that, it is through her actions in saying “Yes” to God that death is overcome. Mary’s life is a testament to giving her all to God, through never desiring anything of herself. Her steadfastness is awe-inspiring.

Finally, like so many moments in the Gospels, the scene of the visitation is such a powerful and yet humbling moment. Imagine these two women being so genuinely happy for each other, and for the world. They display the significance of putting others before themselves. Isn’t this what God has asked of us, to love and serve one another? In Mary’s Magnificat, she gives praise where it is due: God’s goodness is that He remembers the lowly. He loves us despite our weaknesses.

Let us strive today to always try to follow in Mary’s likeness, for no human has ever been so close to our Lord and Savior as our Blessed Mother. 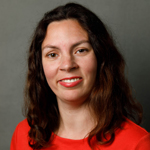 Dr. Alexis Dallara-Marsh is a board-certified neurologist who practices in Bergen County, NJ. She is a wife to her best friend, Akeem, and a mother of two little ones on Earth and two others in heaven above.