As a parish family, our Core purpose is to “bring Jesus to the center of the life of each family.”

Everything that we do here at St. Mary is to serve this purpose.

Through spending time with Jesus in Eucharistic adoration, having Family Catechesis to support parents in their role as being the primary teachers of the faith for their kids, having a school that teaches the faith in every classroom and not simply in a theology class, and everything done through St. Mary is to bring Jesus to the center of the Life of Every Family.

The three values that help serve our core purpose are Take it to Christ… Encourage in Faith… Speak the Truth. 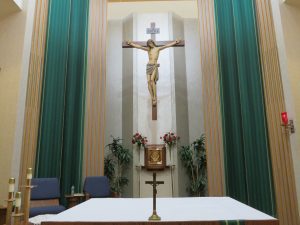 In the 1850’s, Rev. Patrick O’Kelly arrived in Dexter to read mass once a month in four different homes. Many of the village faithful would take the entire day and venture to far off Dexter to worship. As the population grew, it was determined that a new church would be built. Rev. John Van Gennip of Dexter was charged with construction of the new church.

The original St. Mary was a modest brick structure that seated 400 and was finished in 1867. Although small by today’s standards, the church was reverently decorated with an ornate sanctuary featuring a statue of Jesus flanked by two angels. Statues of Mary and Joseph stood at each side in their rightful place. A rectory was not included in the original building plan, so the parish remained a mission until 1875. Priests traveled from Dexter and Chelsea to celebrate mass. Furthermore, the original plans for the parish made no provisions for local parish burial grounds. Prior to January 24, 1881, when the current cemetery site was purchased, parishioners were interned in the old Dexter cemetery located at Dexter Townhall and Quiqley Roads.

The first permanent pastor was Rev. Michael Comerford. He arrived in December of 1895 and served the community until 1911. Under his stewardship, he took on the many responsibilities of growing a congregation and built a rectory on the church property. This rectory, originally located on the corner of Hamburg and Pearl Streets, was later moved to make way for a new church. Today, this building is known as the “White House”.

In the years that followed, under the direction of nine different pastors and many active parishioners, St. Mary expanded its membership and missions. In post-war Pinckney, 1948, Rev. Albert Schmitt came to St. Mary with a fervent desire to provide a Catholic education for the parish. Immediately, he began to motivate and involve parishioners in building a school. Over the course of several years, Fr. Schmitt collected $125,000 from faithful parishioners, enough funds to build a school, purchase and renovate a convent for three nuns, and buy land across from the church for more parking. The new school building consisted of four classrooms, an office, a kitchen, and an auditorium which could be converted to classrooms. The cornerstone was laid on September 14, 1955 and one year later 102 children enrolled in 1st through 6th grades. The Sisters of Dominic provided the entire teaching staff at that time.

Fr. Schmitt was succeeded by Rev. George Horkan in 1958. Fr. Horkan’s pastorate saw many challenges and successes. On April 23, 1962, a tornado struck Pinckney and severely damaged the church and rectory. Miraculously, the school was spared damage. Immediately, Fr. Horkan addressed the problem, and through the generosity of the parish, temporary repairs were made to the structures while long-term plans were made for a new church. Ground for a new St. Mary church was broken on April 26, 1964. Capacity for the church was over 600. To honor its past, the parish moved its statues and icons. The second St. Mary church was constructed for approximately $200,000. On Sunday, January 24, 1965, the new church was dedicated and the dream fulfilled. Sadly, later in the year on May 25, the original St. Mary church was leveled. The following year, on the vacant spot where the old church once stood, a shrine to Our Lady of Lourdes was established over the site where the sanctuary and altar were once erected. To honor the past, the original 1867 cornerstone was built into the grotto and a small statue of the Virgin Mary that stood over the front door was buried beneath.

Rev. Hugh Conkin followed Fr. Horkan in 1967. During the turbulent times of the 1970’s, the school facility was closed. In 1983, Rev. John Fackler succeeded Fr. Conklin and set his sights on re-opening the school. He started slowly, offering only grades K-3. His plan provided for the addition of one grade level per year up to and including the 8th grade. He accomplished this goal in 1988. Simultaneously, Fr. Fackler launched a project to construct a facility to enhance and increase education and social activities for the entire parish. The Activity Center was completed in 1986. Fr. Fackler served the parish until 1992.

A huge growth period in Livingston County followed. Rev. Jim Shaver served the parish for less than four years, 1992-1995, but had a deep impact on the spiritual life of the people. He was succeeded by the Rev. Kenneth Coughlin who faced the daunting challenge of a faith community that needed more space to meet the needs of a thriving Catholic Community.

In 1999, a Renovation Team was formed. For six months they prayed, visited other Catholic parishes around the state, and evaluated a parish survey investigating every available option to expand on the present site.

The decision that a new parish campus was necessary was announced to the parish family in January 2000. The project would be completed in phases. The first phase was to build the Educational Center and a temporary worship space; the second phase would be to construct the permanent church several years later.

On Sunday, April 14, 2002, ground was broken for the new St. Mary campus. The decision was made to maintain our long parish history by moving our Stations of the Cross, statues of the Blessed Virgin and St. Joseph, the Sacred Heart statue, another historic statue of Mary and a refurbished Crucifix to the new worship space.

The new St. Mary was dedicated by Bishop Mengling, along with a litany of local priests, on May 10, 2003. Over 950 people can be seated in the new worship space.