I recently saw on my Facebook wall a quote which read: “The older you get, the quieter you become. Life humbles you so deeply as you age. You realize how much nonsense you’ve wasted time on.”

Until we come to terms that life is a gradual, difficult, gloriously transformative undoing of everything we have built up for ourselves and of ourselves, it will continue to perplex and, in some cases, embitter us.

Just the other day I sat beside a priest friend, sharing my spiritual journey, my self-discoveries that were not that pretty. Of course, I had explanations ready at hand. I thought they added perspective. My friend said, “Those are just excuses. Everything you’re saying is just ego.”

We get caught up in our younger years in wildly exciting things, dreams for what we could do or be, determination to make improvements, change things, build things….

But life tends to lead us out of these sunshine beginnings into the stormy years of our undoing. Then back into the sunshine, then onward to shadow….

The elders of the Jews who were tasked with rebuilding the house of God in Jerusalem had been sent there from their captivity in exile in Babylon. The glories of the former Temple, all that Jerusalem had been for the Chosen People since King David, had been lost. They were beginning again, and anyone who has begun again to rebuild from the ashes knows that it is hard and discouraging work. To rebuild is to face the unknown, to construct in faith, to hope in God, to place ourselves under his mercy, to walk blindly along the paths marked out for us…at his bidding, for his glory, according to his plan.

In the Gospel, we can imagine Mary standing on the outside of the crowd that surrounded the house where her Son was preaching. With his words, “My mother and my brothers are those who hear the word of God and act on it,” Mary’s heart had to have skipped a beat. The relationship of mother-son that she had known since Jesus’ Bethlehem-birth had now to give way to something larger that she didn’t yet understand. These words, certainly a confirmation of her holiness, defined the moment when she realized definitively that her motherhood was not her own, that it never was meant to be her private joy. All that she had been in her mysterious and magnificent YES to the Father was now public “property,” so to speak, for everyone else’s benefit. She had to move over to make room for us. I often think of what Mary must have been thinking and feeling as she turned and walked home that evening….

In our lives, we are led into progressively deeper poverty in which all we once knew as normal becomes shrouded in a future of uncertainty. We walk forward lighter, simpler, more quiet and humble, perhaps less significant. If this is happening to you rejoice. You are being led on the path of holiness which can only culminate in glory. 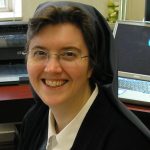