Imagine this: The God of the Universe, the Creator who came in human flesh, chose to speak to you about Himself. And the image He chooses to represent His infinite majesty and goodness is a shepherd. The most basic job in ancient society, the dirtiest and most overlooked position. Jesus, you could have said you were the Good Emperor, Good High King, Good General, or something like that. You would be beyond worthy of those titles and comparisons! But the Good Shepherd???

Jesus chose this title because it fit perfectly into the minds of his audience – the average simple person living in Judea. But also, the role of shepherd has rich imagery in the Old Testament. David, the youngest son of Jesse, is almost overlooked to be chosen for the kingship of Israel because he was out tending to his flock! Though he was a man after God’s own heart, he still fell short of being the ultimate Shepherd that the people of God needed. There is also a lot of imagery in the Psalms referring to Israel as sheep, and God himself as shepherd. “The Lord is my shepherd, I shall not want” (Psalm 23:1).

So what can we learn from this imagery, and what does Jesus himself say about it? It seems that humanity was in desperate need for a Shepherd that did not fail, did not mislead, did not run like the hired man who was only in it for money. But it seemed like the only way that could happen was if God himself, the shepherd from the Psalms, arrived to lead them. And in Jesus, that’s exactly what happened! God himself took on the basic, dirty job of tending his sheep, learning who they were, and ultimately laying his life down for them. Like David defending his flock from lions and bears, Jesus took on the jaws of death itself to save us. St. Cyril makes a great comparison between Adam and Jesus; how one misled the flock, and one rescued it: “Therefore, as the father of sin [Adam] had, as it were, shut up the sheep in hell, giving them to death to feed on, as it is written in the Psalms, He [Jesus] died for us as truly Good, and truly our Shepherd, so that, the dark shadow of death driven away, He might join us to the company of the blessed in heaven.”

Where you Go I Go – Bethel, Brian Johnson

There’s Nothing that our God can’t do – Passion, Kristian Stanfill 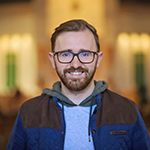 Brendan is just your average Millennial hipster: He likes playing guitar, throwing frisbees, sipping whiskey, and grooming his beard. But he also has a passion for walking with teens and young Christ-followers, hearing every person’s story, and waking up the Church. Brendan works at Holy Trinity Catholic Church in Lenexa, Kansas (near Kansas City) as a Youth Music Minister, fusing together his two loves of sharing Christ and sharing the power and need for good and beautiful contemporary praise. https://www.instagram.com/brendanbeardo/