When looking up the definition of humility, I came across two different responses.  It was first defined as a modest or low view of one’s own importance; humbleness. The second definition states, freedom from pride or arrogance: the quality or state of being humble. Whenever I think of this topic, I think of my good friend Stephen. We met in college and throughout our friendship, I began to realize that Stephen’s definition of humility followed the first definition. Whenever someone would affirm him or acknowledge his gifts, he would hang his head low and so “No, no, no. I’m not (fill in the blank)”. He was nervous that if he received these compliments and praises that he would not be “humble”. As a good friend, I called him out on this wrong definition of humility. He began to work on it throughout the year and as he did, he began to change. By the end of the year, there was a new sense of joy, peace, and humble confidence in him. He finally understood that humility doesn’t mean ducking your head low and rejecting or denying your own goodness. If one is truly humble, there is a sense of freedom. A freedom from the sins of pride and arrogance. When others would compliment or affirm something he said or did, he now responded with “Praise God! Thank you.”

In today’s readings, we hear the Gospel parable of the Pharisee and the tax collector. The Pharisee thanked God for not making him like everyone else and recalls all the holy things he did. The tax collector only focuses on himself, beats his breast and prayed, ‘O God, be merciful to me a sinner.’ We are told at the end of the Gospel that the tax collector was justified, not the Pharisee. The Pharisee was comparing himself with others, this is not true humility. True humility is looking into the inmost depth of one’s own heart, not focusing or comparing the tasks of everyone else. Jesus said, “for whoever exalts himself will be humbled, and the one who humbles himself will be exalted.”

We can learn more about humility from the Second Reading.  St. Paul writes to Timothy that he has been poured out in sacrifice. He recalls that he has competed well, finished the race, and kept the faith. He states that everyone abandoned him, but asks that it not be held against them. He finishes his letter giving credit to the One who made all these things happen. “But the Lord stood by me and gave me strength so that through me the proclamation might be completed…The Lord will rescue me from every evil threat and will bring me safely to his heavenly kingdom. To him be glory forever and ever”. St. Paul doesn’t take credit for the good things he has done, but instead, gives all credit to God. This is the example of true humility, not denying the good that has been done, but praising the fact that it is only possible through God!

I hope that as you continue to do God’s will in your life, you recognize that He is the source of all glory and remember that or whoever exalts himself will be humbled, and the one who humbles himself will be exalted.” 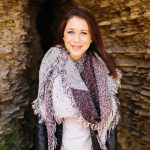 Briana is the Pastoral Minister at St. Mark Church in Cleveland, OH. She is also a district manager at Arbonne. She received her Bachelor of Arts in Theology and Catechetics from the Franciscan University of Steubenville, OH and is excited to use these skills to serve the Church. “My soul has been refined and I can raise my head like a flower after a storm.” -St. Therese